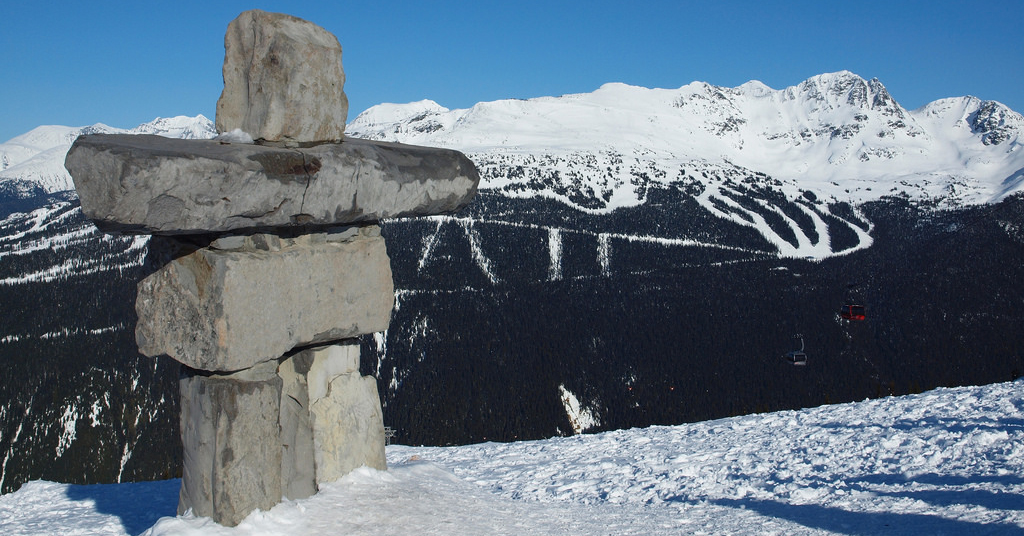 The game of Whistler originated in Whistler, BC, Canada in the summer of 2005 in the Fairmont Chateau Whistler hotel. It is loosely based on the game Thirty-One and is ideal for families to play together given the simple rules but potential for strategic play that challenges parents and children alike.

PLAYERS. Two to six. The game becomes progressively harder with more players and is best played with three or four.

PRELIMINARIES. Cards are drawn, high card is the first dealer. Players who tie for high card each draw again until the tie is broken.

DEALING. Dealer shuffles the Deck. Each player then receives four cards face down, dealt one at a time beginning with the player to the
dealer’s left. One additional card from the deck is turned face up in the middle of the table to begin the Discard pile. The remainder of the deck is placed next to the Discard face down and forms the Stock. Players pick up their cards to form their Hand.

THE PLAY. The player to the dealer’s left begins play. In turn, each player draws either the top card from the Discard or the Stock. The player adds the new card to her Hand and selects one card from the Hand to discard. If the cards in the Hand form one of the Special Hands, the player announces the name of the Special Hand, places the discard card face down on the Discard pile and play ceases with the player declared the winner of the game. If not, the player places the discard card face up on the Discard pile and play continues with the next player to the left.

KNOCKING. If, during a turn, a player believes her hand has higher total points in a single suit than any other hand in play, the player may Knock by rapping her knuckles on the table before discarding. Knocking signals that all other players must each complete one more turn. After the last player has finished her turn, the Hands are revealed and the point totals calculated. The player with the highest point total in a single suit wins. If any player acquires a Special Hand during the Knock round, they immediately win the game and no other player may score. Any player(s) who has more points than the Knocker or wins with a Special Hand is declared to have Beat the Knocker and scores double (see SCORING). Ties are awarded to the Knocker for having the courage to test their hand by Knocking.

SPECIAL HANDS. Three special types of hands are immediate winners in Whistler and cause play to cease. They are:

WRONG NUMBER OF CARDS. Before play: New deal (see Misdeal). During play: A hand found to be short draws cards from the Stock without penalty.

INVALID SPECIAL HAND. Player declares they have a Special Hand but on inspection is found to not be the case. Player shows his hand to all other players, corrects his discard (i.e. face up) and play continues.

Flexibility in strategy is key in playing Whistler. It is not uncommon to change strategy two or more times in a game depending on cards played by others or cards acquired during play. It is important to track not only what cards have been discarded but what cards other players are accumulating as this hints at the composition of their hands and helps determine the potential of a player’s hand. In many cases, it may become clear that the current cards in the hand cannot win given other cards that have been played. For example, having a strategy of collecting Hearts because your hand holds the A ♥ and 8 ♥ no longer makes sense if other players have discarded the K ♥, Q ♥ and 10 ♥. This is because the remaining possible hands have a low probability of winning.

The Party hand is the most difficult hand to achieve as it requires four specific cards. A Whistler hand requires four out of a possible five cards in the deck.

When playing for a Runner, low card runs have a higher probability of success than high card runs as the player to the right is more likely to acquire and keep high cards (i.e. aiming for Whistler) and therefore not pass them on through the Discard.

A good candidate for a Runner is a hand containing a run of three consecutive cards in different suits. A card of the fourth suit at either end of the run would win. For example – 3 ♣, 4 ♦, 5 ♥. Either the 2 ♠ or the 6 ♠ would win.

A better candidate for a Runner is a hand containing a run of three consecutive cards in different suits with the fourth card repeating one of the other three in the same suit as one of the others. For example – 6 ♥, 7 ♥, 7 ♣, 8 ♦. In this case, there are four possible cards that can form the winning hand. 5 ♠, 5 ♣, 9 ♠, 9 ♣.

The strategy for Knocking depends on the duration of the game. If it is very early in the game, a hand with point totals above 20 can frequently win. If it is later in the game, point totals less than 30 would be a risky Knock unless it is clear that others are trying for Runner or Party hands.

There is a variation of the standard Whistler game called Whistler Village. In this game, if a player Knocks, the other players, at their option, may offer to help the player to their left by asking “What do you need?” when it is their turn to discard. The player to the left may request a specific card or type of card e.g. “the Seven of Diamonds” or “any high Spade” and the player may elect to fulfill this request with his discard. Play continues as in the regular game.

Another variation of either the standard Whistler game or Whistler Village is to replacing rapping on the table with whistling a few notes.